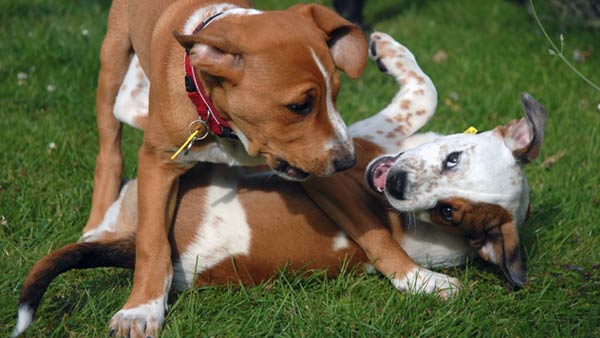 Dominance in Dogs is Not a Personality Trait

The Definition of Dominance

So what exactly is dominance? Dominance is defined in animal behavior as a relationship between individuals that is established by force, aggression and submission in order to determine who has priority access to multiple resources such as food, preferred resting spots, and access to mates. For instance, when a group of sex-hungry bulls are introduced to each other they immediately fight in order to establish rank.

Now, if you’re a woman reading this, you’re probably rolling your eyes thinking, “Oh brother. Dumb males at it again.” But in the wild this fighting is actually really important. The bull that wins the encounters with all of the other bulls becomes the highest ranked and, thus, the dominant male of the group. That means that he’ll have priority access to food, resting areas, and, hubba hubba, young, desirable cows. Ideally, these high ranked males aren’t just going to stand around and look. They all want to mate. The highest ranking bull will have the most chances to mate, which will hopefully result in little Juniors that are carrying his genes.

Being the highest ranked means that, during mating season, the other males will make way if the dominant bull is approaching a female in estrus (a.k.a in heat). So, even if a lower ranked bull is planning to mate with a cute cow himself, if the dominant bull approaches, he’ll change his plans fast and head the other way.

But that’s not the end of the story. Because sex is so important for passing one’s genes on, even seemingly bone-headed bulls can play a game as devious as that on your favorite soap opera star. A lower ranked bull may sneak copulations with cows when higher ranked bulls are not looking. As a result, in a pasture of several males and many females, the calves will be sired by more than one bull, but the highest ranked bull will get the most matings.

Dominance Rank Changes Based on the Social Group

Unlike a personality, which by definition is a set of behavioral characteristics that stays the same across different contexts, rank changes depending on the group an animal inhabits. If four individuals who are dominant in their own social group are all placed together, only one will be dominant in the new group. Anyone who owns chickens is familiar with this concept. Once, I had a flock of 3 trick trained chickens-one rooster and two banty (miniature breed) hens. When I added a third hen, Goldie, she immediately pecked the two other hens and established that she was the highest ranked of them all. This sorta made me mad because the original two were cute and knew a lot of tricks. But ultimately, I did get my revenge. When I brought the evil hen Goldie and my rooster over to a friend’s house, her hens, which were full-sized, put them both in their place. Goldie and the rooster had been at the top of the male and female totem poles at my house but were at the bottom at my friend’s.

If Dominance is Not a Personality Trait, Then What About These Behaviors?

You’re probably wondering, if dominance is not a personality trait then what are the traits we’re talking about when we’re incorrectly referring to a dog as being dominant? It depends on the situation.

For instance, I’ve heard one celebrity dog trainer on T.V. describe a light-fixated dog as trying to be dominant to the light. The idea was that the dog must learn to be submissive to the light. In animal behavior, submission and submissive behaviors are those that are meant to turn aggression off, to signal that one individual does not want to fight. Now, if you insert that definition into the trainer’s statement the trainer would be saying that he wanted the dog to perform behaviors that would turn off aggression by the light. Hmm. Sound kinda fishy, like the wrong word inserted into a Mad Lib? It should. As odd as this dog may have been, he did not have a social relationship with the light. What he most likely had was a compulsive disorder causing him to fixate on the light.

Then, there’s the case of the puppy or adult dog who loves to jump on you to greet you exuberantly or who even barks to be picked up and placed in your lap. They aren’t using aggression and aren’t trying to establish high rank and priority access to everything they want. Rather they are just unruly or untrained. Their exuberant jumping and barking have been rewarded when owners finally give in and pet them or acknowledge them when they perform the naughty behaviors.

And there’s the case of my naughty Jack Russell Terrier, Jonesy. When I first got him at 8 months of age, and introduced him to my parent’s Scottie Maggie and my Australian Cattle Dog Zoe, he immediately tried to mount them. Was this a clear cut example of him trying to establish dominance rank? Or was it an example of a silly pup trying to have sex with two spayed females? Actually it was neither. If Jonesy, who was already neutered, were trying to establish high dominance rank, then when the others snapped at him to go away, he would have fought back. What he did instead was to bounce around and play bow. His mounting behavior was inappropriate play behavior. In fact, Zoe was clearly higher ranked. She would sometimes chase him away from chew toys or treats and he’d always back off. But if she wasn’t paying attention, he would sometimes sneak up to her and mount her. So the trait he was exhibiting was that he was socially inept.

The examples go on and on and the cause of the behaviors need to be evaluated on a case by case basis. Most likely, if you stick to the scientific definition for dominance and then look more closely at the dog’s behavior, body language, and the reaction of the animals around him, you’ll find dog behavior to be much more nuanced and interesting.

We cover all of Miami Dade, Broward and Palm Beach counties.