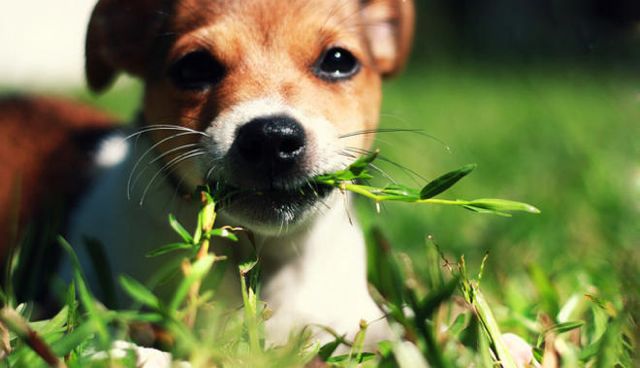 Why is my dog eating grass?

Why Is My Dog Eating Grass?

Your beloved canine companion clearly isn’t a cow, so you might be confused when you see him eating grass. You might even be worried. Is he hungry? Bored? Sick? Will eating grass hurt him?

First, rest assured that you’re not alone in your concern, especially if your dog is eating grass and vomiting.

Pica is the technical term for the disorder characterized by eating things that aren’t food. Sometimes pica indicates that your dog has some type of nutritional deficiency, though it is often simply a sign of boredom, especially when practiced by puppies and younger dogs. Dogs eating grass is actually quite common (it has been observed in wild dogs, too, and may be completely natural) and this form of pica does not usually cause too many problems. In fact, most veterinarians consider it a normal dog behavior. One small-scale study of 49 dog owners whose dogs had regular access to grass and other plants found that 79% of the dogs had eaten plants at some time. Another survey about plant-eating dogs found that grass was the most commonly eaten plant.

There are a variety of reasons your dog might be grazing on your lawn.

Some people propose that dogs might turn to eating grass when they don’t feel well as a way to make themselves vomit, and then feel better. Others dispute this idea, on the basis that dogs are not proven to be smart enough to decide to treat an upset stomach by eating grass.

Evidence suggests that most dogs that eat grass aren’t unwell beforehand, or at least they don’t seem so. In fact, fewer than 10% of dogs seem to be sick before eating grass, according to their owners. And grass-eating doesn’t usually lead to throwing up — less than 25% of dogs that eat grass vomit regularly after grazing.

Other suggested reasons why your dog might be eating grass include improving digestion, treating intestinal worms, or fulfilling some unmet nutritional need, including the need for fiber. One published study reports on a miniature poodle that ate grass and then vomited every day for seven years. Three days after putting the dog on a high-fiber diet, the owner reported that the dog stopped eating grass entirely. And, of course, there is also the possibility that your dog simply likes the way grass tastes or feels.

Should I Stop My Dog from Eating Grass? If So, How?

If you suspect your dog is eating grass because he’s bored, it might be beneficial to be sure he’s getting enough exercise. Engage him in some fun activities. Try tossing a Frisbee or playing another interactive game with him, or buy him a sturdy chew toy to keep him occupied.

On the chance that your dog’s pica behavior is caused by a nutritional deficiency, switching to a better dog food, especially a high-fiber variety, could help alleviate the problem.

Although most experts agree that grazing itself isn’t harmful, one thing to keep in mind is that certain herbicides and pesticides used on lawns can be quite toxic, especially if ingested. Additionally, a number of common house and garden plants are toxic, which could lead to problems if your dog munches on them along with the lawn. To make sure the plants in and around the area where your dog is eating grass aren’t dangerous, check the ASPCA’s Animal Poison Control Center web site, which maintains a list of toxic and non-toxic plants.

We cover all of Miami Dade, Broward and Palm Beach counties.